Trafficking of Venezuelan Girls in Trinidad & Tobago Down to Cops Inability and Unwillingness to Tackle Menace says, Activist 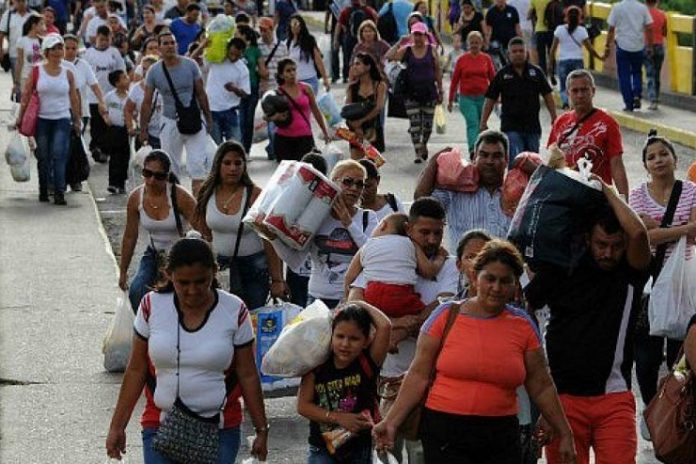 A Venezuelan activist and public relations officer at TTV solidarity Network, Heidi Diquez, has accused the police of not enough to protect Venezuelan migrants from exploitation.
Diquez was in attendance at a panel discussion on the menace of human trafficking. The event was hosted by the Franciscan Institute at the University of West Indies (The UWI) chaplaincy in St Augustine.
The panel comprised of the director of the Counter-Trafficking Unit Alana Wheeler, manager of the newly-established Gender-Based violence unit Pollard Shireen, attorney Jonathan Bhagan among others.
Diez, who was a member of the audience, became emotional during the question-and-answer segment, as she said the hardships in Venezuela had opened young Venezuelan women to trafficking and other crimes. During the question-and-answer segment, Diquez who was in the audience got very emotional while trying to highlight the plight of young Venezuelan girls who she said were vulnerable to exploitation due to the bad state of things in their country. She went further to explain that there were traffickers going as far as using social media platforms like Facebook to target girls in the university. This ladies she claims are manipulated into coming down to T&T where they are defiled, abused and exploited. She said there were Facebook accounts dedicated to advertising Venezuelan girls for sale.
“We actually have T&T Facebook accounts showing the faces of these little girls in the university being practically sold in Trinidad,” she said. The trauma that the family members of such hapless victims have to go through has been a source of great concern to her too. She said, “It breaks my heart to see how mothers and family members are asking for support (to find) their missing loved ones who are actually here.”
She broke down in tears while stating that the police and other law enforcement agencies always turn a blind eye to glaring cases of such exploitation.
She gave an example of a popular car wash in San Juan to buttress her point. She said always pass by and see girls – who are almost nude – washing cars in bars without doing anything. She said such girls who are mostly illegal immigrants from Venezuela are scared of reporting to the police. They risk being taken to the Immigration detention centre.
Diquez’s sentiment was shared by several people in the audience who took turns to blame the police for being complicit in the crime of human trafficking.
Pollard who is the manager of the Gender-Based violence unit said migrant women should feel free to seek help and protection from her unit. Their status as illegal immigrants would not be used against them as that is treated as a confidential issue.
The director of the Counter-Trafficking Unit, Wheeler said that despite the fact that migrant women are susceptible to being trafficked, the women of the country are equally vulnerable. She said that there is a high demand for commercial sex in T&T and a lot of young people want to make quick and easy money. She went on to say that men are also being trafficked. She said there are men who make thousands of dollars per night from commercial sex. She said many of the Youths are from families facing financial difficulties and they have to shoulder responsibilities like paying for their own tuition.
She said that young people should always be on their guard as this traffickers use social media platforms like Facebook, WhatsApp etc to locate vulnerable people and make victims out of them. They take advantage of the desire for affection and attention to recruiting young people.
She put it like this, “Facebook, WhatsApp and all these different types of social media—we know young persons and teenagers, young adults, even adults now become addicted to social media. These persons often fall prey.” she said
She said that the days are over when parents whose children do not go to social functions feel safe because they think those children are doing something ‘productive’ with their computers.
“There are some parents who like to boast that their child doesn’t go anywhere, they don’t lime or party and they are always home and they are always on their computer. They are actually more vulnerable than the ones going out and partying.” She concluded.
On his part, the Attorney, Bhagan called for more public and private sector funding for the Director of public prosecutions. He pointed out that several high-profile arrests made in connection with human trafficking have not led to any conviction till date. Apart from other factors, funding is germane in order to restructure the directorate, hire more qualified hands and create a unit specifically for the human trafficking-related offence.
He said, “It is very important for the DPP department to receive more funding and more staff, and to create a specialised unit for the prosecution of human trafficking crimes in this country in order to increase the speed and the rate of conviction of these crimes.”

Boat with 20 dead people, including 2 children found in the Caribbean