Soca superstar, record producer, songwriter and popular entertainer, Machel Montano is married. The wedding was today. The Trinidadian icon got married to Renee Butcher who is a yoga instructor in Port of Spain.

The king of soca’s big wedding took place at the newly refurbished Red House in Port of Spain. That location and the date of the wedding – Valentine’s day – gave the occasion a special significance. The wedding ceremony was held in the hallway found on the south of the beautiful edifice. 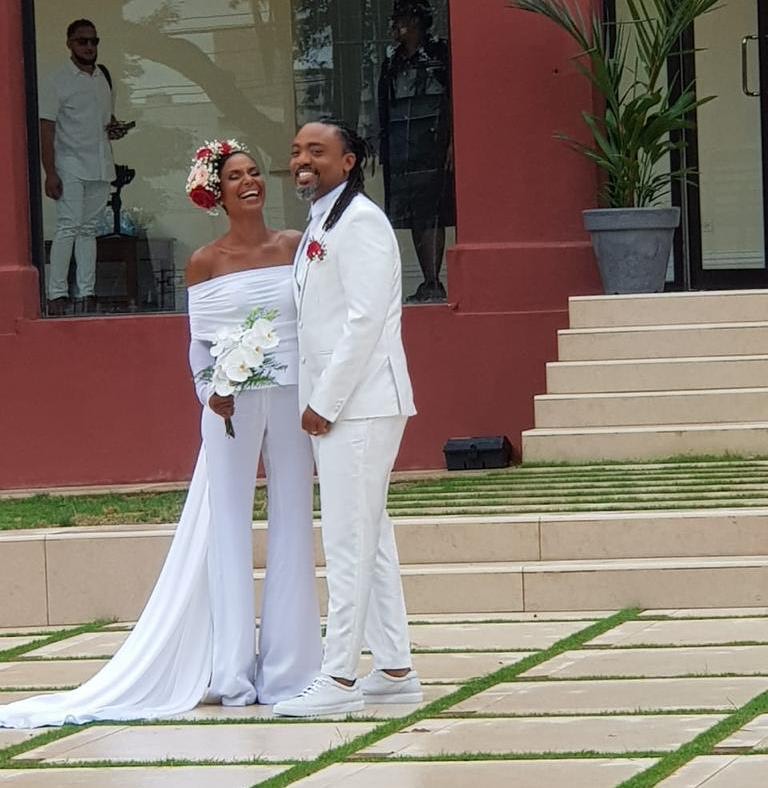 The couple arrived in different vehicles with their respective parents.

It was Montano who came in first at 11:20 am dressed in a lovely white suit. The vehicle conveyed himself and his parents.

Butcher was the next to appear alongside her parents. There was a beautifully coloured flower piece on her hair. She also wore white pants as well as an outfit that came of the shoulder. A long white flowery robe served as a trail.

The couple were greeted by the Attorney General Faris Al-Rawi as they alighted their vehicles. He carried a large white umbrella with which he accompanied them in the building for the ceremony.

The ceremony began with the officiating minister – the renowned Pastor Clive Dottin – saying the opening prayers.

Everyone present for the occasion was dressed in all white. The ceremony has relatives, friends, colleagues and partners in attendance.

The media was prevented from coming in to cover the event. The event planning was handled by Lisa Ghany who is the director of Xceptional Events Ltd.

At the balcony of the Red, houses were staff and many personnel anxiously bearing cameras in their hands in order to take shots of the new couple. It is the first wedding being held at the red house since its refurbishment and reopening. The ceremony will continue on Monday with the theme “Machel Monday” and all those who will be in attendance are expected to be in white. The occasion will also be tagged as “The Wedding. ”

Trinidad: Woman dragged as costume gets caught in truck

(TRINIDAD GUARDIAN) – De­spite al­most be­ing in­jured and even killed, mas­quer­ad­er Nat­acha Jones thanked the au­thor­i­ties at the Port-of-Spain Gen­er­al Hos­pi­tal for the treat­ment she re­ceived on Car­ni­val Tues­day. Ac­cord­ing to a Face­book post on […]

With her husband terminally ill, Gasparillo mother Chandramatee Sammy-Rojan was shot dead in a suspected hit by a relative who may now seek to inherit her home. Family and friends believe they know who ordered […]

(Trinidad Express) Two police officers are among three people charged with trafficking in person (child) for the purpose of exploitation, under Section 18 of the Trafficking in Persons Act. Acting Inspector Rajesh Gookool, 47, and […]