(Jamaica Gleaner) Dramatic scenes unfolded in Mandeville, Manchester, yesterday evening as the long-standing Heaven’s FESCO petrol station there went up in flames, causing injuries to at least seven people and sending passers-by scampering for cover.
Four persons have been hospitalised with third-degree burns and three others are now nursing minor injuries, while 12 vehicles were destroyed, authorities said last night, even as investigations were ongoing.
Approximately 5:40 p.m. yesterday, the service station, which is located at the intersection of Perth Road, Manchester Road and Caledonia Road, was engulfed in flames, emitting a heavy blanket of smoke across sections of the town and causing chaos among customers and commuters. As several explosions were heard, screaming and high-voltage noise pierced the air, sending even people occupying nearby buildings into panic.
Officials, up to press time, were yet to identify the cause of the massive fire, but Emeleo Ebanks, public relations officer at the Jamaica Fire Brigade, confirmed with The Gleaner last night that several units responded and managed to extinguish the blaze.
Superintendent of Police Gary Francis said that the fire was brought under control by three units from the Manchester Fire Department.

Three fire units are now trying to extinguish the blaze at the Heaven's FESCO gas station in Mandeville, Manchester. Several cars have also been trapped on the property. The fire has since spread to an adjacent complex. Curious onlookers have converged nearby.


“Myself and 20 other officers are actually managing this situation,” said Francis.
Videos sent to our news centre last night captured when the incident happened.
One video showed a gas station employee attending to what appeared to be free-flowing fuel at one of the pumps while others stood around gawking and videotaping at the popular top-up facility when a sudden explosion occurred.
Jessica Mullings, who was parked opposite the gas station, told our news centre yesterday evening that “it was so surreal”.
“I was so scared! People were screaming. You could hear vehicles on fire over there and a lot of popping sounds. But what was frightening was that people were actually moving towards the gas station and not away.
“I actually left my vehicle and went over to where Scotiabank is because I don’t know what can happen, and if all that gas below somehow gets ignited, God know what could happen,” Mullings recounted.
FEAR AND CONFUSION
Another eyewitness captured the fear and confusion sparked by the blaze.
“I was in my store when I heard the explosion and I ran out. I saw the first pump explode, and then the second, and then the third. In no time, the whole gas station was under fire … ,” said a nearby business owner who gave his name as Danny. 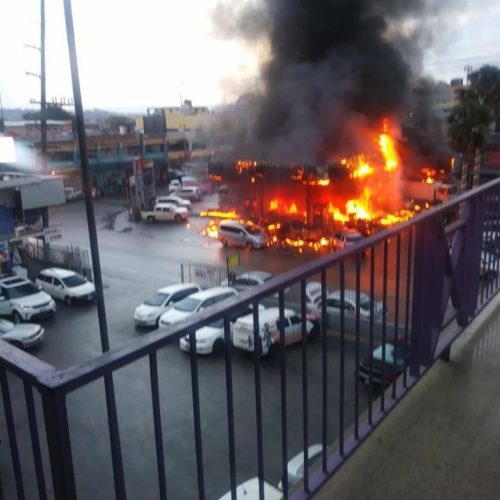 “I am just glad that the fire never escape to all the other places nearby , but I feel it for all those persons who were there getting gas … .”
Trevor Barnes, chief executive officer of FESCO, told The Gleaner last night that he received a call some time after 5 p.m. that the station was on fire.
“We are trying to find out what happened. But it is very unfortunate. We are getting different reports, but first and foremost is trying to make sure everybody is okay. I really don’t know what happen or what caused the fire right now,” Barnes said, mentioning that directors and senior managers of the company were on their way to Mandeville to assess the damage and to give support to those affected.
“As a company, we are resilient and we will do what’s necessary to come back, but right now, it’s just really to just ensure that everybody is okay,” he added.
Barnes said that several businesses, including a cambio, a money-transfer facility, and a tyre workshop, are in the immediate vicinity of where the blaze took place.
BURNING MAN
Another video that was sent to our news centre last night showed a badly burnt man walking dazed towards the Manchester High School near Perth Road in Mandeville.
He was eventually rushed to a nearby hospital, but his condition could not be ascertained up to press time last night.
Two weeks ago, an explosion at Villa Road Primary School, also in Mandeville, resulted in the death of Petcom driver assistant Nimoy Cross.
The 36-year-old man was filling a gas cylinder at the school when he was hurt in the explosion.
Four others were also injured in that incident.
It is uncertain whether the fire will affect FESCO’s engagement with NCB Capital Markets in its upcoming initial public offer (IPO). FESCO is set to become the first fuel network in Jamaica to present an IPO and will seek approval from the Jamaica Stock Exchange for its shares to be listed on the Junior Market.
FESCO has a range of capital projects under way that will climax with a hunt for equity financing by the fourth quarter of the year.
Besides Mandeville, the fuel network boasts 13 service stations.
FESCO plans to add seven more locations by year end, with a $300m complex under construction.