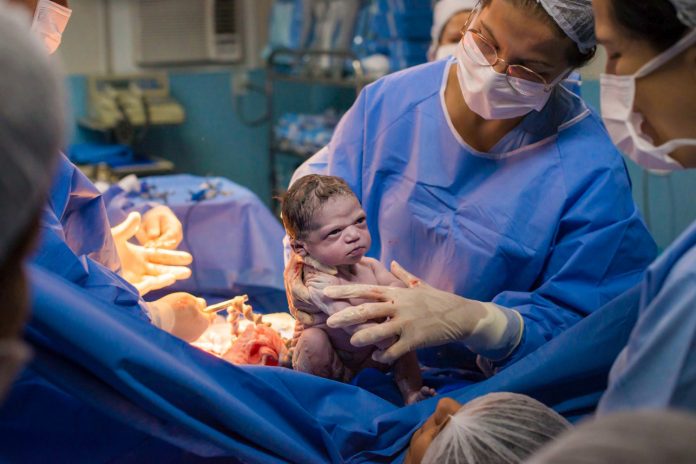 Isabela Pereira de Jesus — who was conceived around the time Grumpy Cat died — appears to channel the famed sourpuss in this photograph taken moments after her birth in Rio de Janeiro, Brazil, on Feb. 13.
“She opened her eyes wide but did not cry. The doctor even had to say, ‘Cry, Isa!’” said photographer Rodrigo Kunstmann, who was hired by mom Daiane de Jesus Barbosa to document the birth, according to news.com.au.
“She made that serious expression and only started crying after the umbilical cord was cut,” he told local magazine Crescer after the C-section birth.
Doctors make sure that newborns cry right after birth because it shows their lungs are working properly and it helps them clear fluids from their body.
The internet has predictably gone gaga over the indelible image that captured Isabela making a “cross old man’s face,” which the proud mother said proves how brave her baby is.
“My baby was born courageous,” she told Brazilian news outlet G1, according to the Daily Mail.
“It’s a meme already. She always wrinkles her forehead when changing diapers and nursing. Isabela was supposed to be born on the 20th, but she chose her day already showing her personality,” she added.
Social media users reacted to Isabela’s postpartum peevishness on Facebook, where Kunstmann shared his snaps.
“Poor munchkin. She’s only been on the planet for a few minutes and she has had enough,” one wrote.
“Not only the frown. Look at those eyes, if looks can kill, they are like daggers,” another said.
A third noted “the look of reincarnation. Oh no! Not this place again!”
(NEW YORK POST)