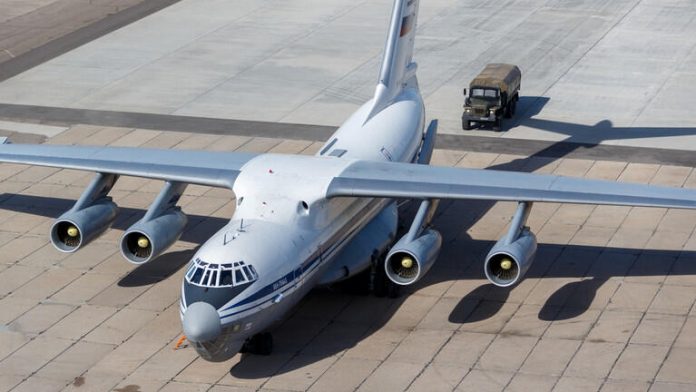 A Russian military transport plane loaded with medical equipment took off early Wednesday from an airfield outside Moscow and headed for the US, following a conversation between President Trump and his Russian counterpart Vladimir Putin, according to a report.
Putin offered supplies to help fight the coronavirus pandemic during a phone call with Trump on Monday, which focused on how to respond to the outbreak, Reuters reported.
“Trump gratefully accepted this humanitarian aid,” Kremlin spokesman Dmitry Peskov said Tuesday, Reuters reported, citing the Interfax news agency.
The Russian Embassy said on its Twitter account that Moscow sent the aid as Trump predicted the death toll in the US could be between 100,000 and 240,000 and amid hopes that the Trump administration would return the favor if the outbreak becomes severe in Russia.
“Importantly, when offering assistance to the American colleagues, President Putin is guided by the following consideration: when manufacturers of medical equipment gain momentum they will be able to reciprocate if need be,” the tweet said.
Trump on Monday said he had talked to Putin and suggested Russia would be sending aid.
“I have to say, we’ve had great relationships with a lot of countries,” Trump said. “China sent us some stuff, which was terrific. Russia sent us a very, very large planeload of things, medical equipment, which was very nice.”
Russia reported more than 2,000 cases of the virus, but many health experts have questioned the accuracy of the data.

Facebook
Twitter
WhatsApp
Pinterest
Previous articleThe world could soon run out of space to store oil. That may plunge prices below zero
Next articleItalian nurse strangles doctor girlfriend, claims she gave him coronavirus

Some US states shut down vaccine sites after adverse reactions