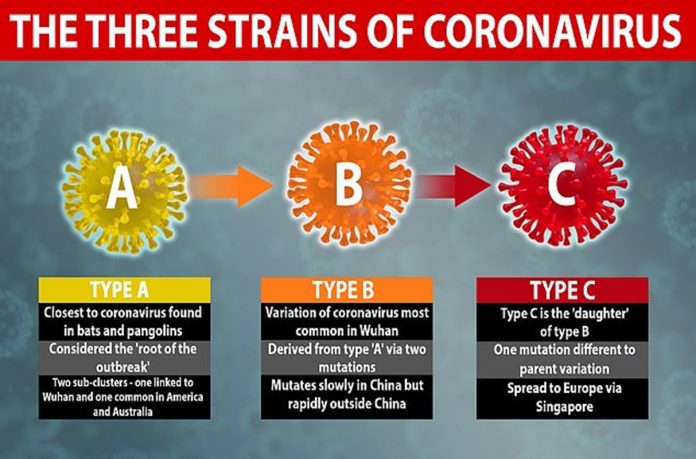 Scientists have discovered Australia is in the grips of two different strains of coronavirus.
Cambridge University researchers mapped the genetic history of the infection from December to March and found three distinct, but closely related, variants.
While Australian authorities are struggling to find a cure for the original virus which developed from animals, they’re also battling a mutation known as strain C.
Type A is the most prevalent in Australia, however Type C has also been recorded in Sydney, according to the experts.
Analysis of the strains showed type A – the original virus that jumped to humans from bats via pangolins – was not China’s most common. Instead, the pandemic’s ground-zero was mainly hit by type B, which was in circulation as far back as Christmas Eve.
Type B was also the dominant strain across large parts of the United Kingdom and Europe, but has not made it to Australia.
Type C was an offshoot of Type B, mutating from the secondary strain and spreading to Europe and Australia via Singapore.
Scientists believe the virus – officially called SARS-CoV-2 – is constantly mutating to overcome immune system resistance in different populations.
The academics’ published work – which has been scrutinised by fellow scientists – only traced the samples of 160 patients across the world, including many of the first cases in Europe and the US.
Methods used to trace the prehistoric migration of ancient humans were adapted to track the spread of the SARS-CoV-2 virus, which causes COVID-19.
The team have now updated their analysis to include more than 1,000 COVID-19 cases up to the end of March to provide a clearer snapshot. It has not yet been peer-reviewed.
The smaller snapshot, published in the journal PNAS, initially suggested that type C was the most common in Europe.
But the data now shows type B is spreading more rampantly – all but one of 31 SARS-CoV-2 samples taken from patients in Switzerland were of the second cluster.
(THE DAILY MAIL)