Jamaica: Heartbreak as 2-year-old girl is killed by family member in St Mary

Richard Cox thought he was taking three of his children to experience pure fun in Gayle, St Mary, on Wednesday morning. But the hope of a blissful, dreamland-type day vanished and was replaced with unfathomable tragedy after Cox’s two-year-old daughter, Mikayla, was murdered, allegedly by a family member.
The man, 39-year-old Romario Henry, who is a cousin of Mikayla, and believed to have been of unsound mind, was killed by a mob shortly after slitting the throats of Mikayla, her five-year-old cousin and an elderly man. 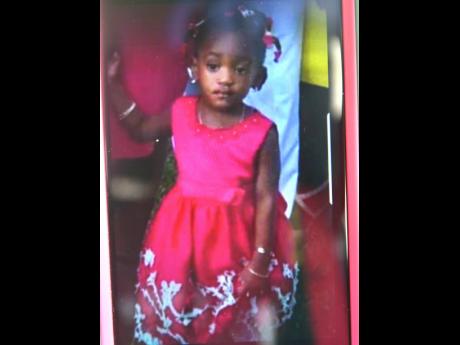 Mikayla did not survive the attack.
Blood-stained rocks and the mournful faces of relatives in their yard indicated that the graphic incident was still etched in the front of their minds when THE WEEKEND STAR visited on Thursday.
“Wednesday morning mi carry dem down here. Mi go inna di town bout 3:50 p.m., and bout 5 p.m. mi get the news seh she dead. How mi must leave mi baby there and that happen?” he pondered.
“She smarter than anything. Mi carry dem come a mi dream world to have a dream, and he destroyed my children’s dream.”
ACTING STRANGE RECENTLY
THE WEEKEND STAR understands that Henry, the man who carried out the wicked acts, was a very good chef. He reportedly began acting strange recently.
Mikayla’s teenage sister witnessed the tragedy.
“Mi start ball and seh you kill mi sister, suh mi a guh kill yuh back! Some man come and hold on pon mi … I feel distracted and confused.”
Mikayla’s teenage brother, who jumped out of sleep when the incident started, claimed he had a premonition the morning they were leaving their St Andrew home for St Mary.
“When daddy was taking us here, I was praying. Somehow, I felt something would happen, but definitely not this,” he said.
He said, too, that the morning before they drove out, a man stood at their gate on Tamarind Turn in Olympic Gardens, St Andrew, warning of tragedy.
Meanwhile, when THE WEEKEND STAR visited the Olympic Gardens home where Mikayla, her siblings and her parents lived, one man described her as a brilliant and well-mannered child.
“You waah see how her hair comb well nice before she go weh Wednesday. A September she did supposed to start school. If she come out yah suh now, she tell everybody good morning. When dem hear, people come from every road in the community to show support. She was mannersable,” the resident said.
(Jamaica Star)