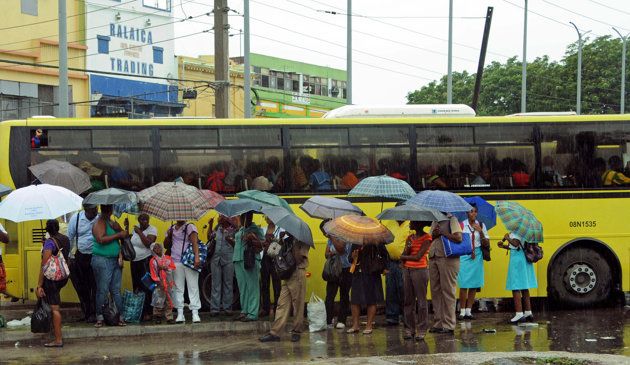 Pandemonium erupted on a St Andrew bus on Wednesday as terrified commuters leapt from the vehicle fearful that an elderly passenger in the throes of death might have had COVID-19.
The unidentified man, aged about 65, was pronounced dead at the Stony Hill Health Centre after having apparently suffered a seizure onboard the public- passenger bus.
With stigma and discrimination rife in Jamaica as community spread of the coronavirus disease looms, little help was reportedly rendered to the elderly man as other commuters panicked.
The mid-morning incident sent frightened passengers scampering to the exit, some jumping through windows, trying to escape the clutches of what was thought to be COVID-19.
“The bus was coming from Lawrence Tavern, and it’s like the man tek the last gap (gasp) right in front of me … ,” said eyewitness Mark Brown.
“Mi see him take two gap, and by time yuh quint, we see a nurse, and dem carry him go the clinic, and him dead as dem reach.”
Brown, a popular vendor in the community, said it was the excitement at the scene that alerted him to what had transpired.
“The bus stopped right in front my stall. Before they took him to the health centre, they were saying, ‘Him dead! Him dead!’,” Brown recounted. “People run up and down. Some all jumped through the window. They were scared.”
Inspector Linval Harrison of the Stony Hill police confirmed the passenger’s death.
“The driver took him to the Stony Hill clinic, where he died shortly after. It seems he was ailing from several underlying issues,” said Harrison.
(Jamaica Gleaner)