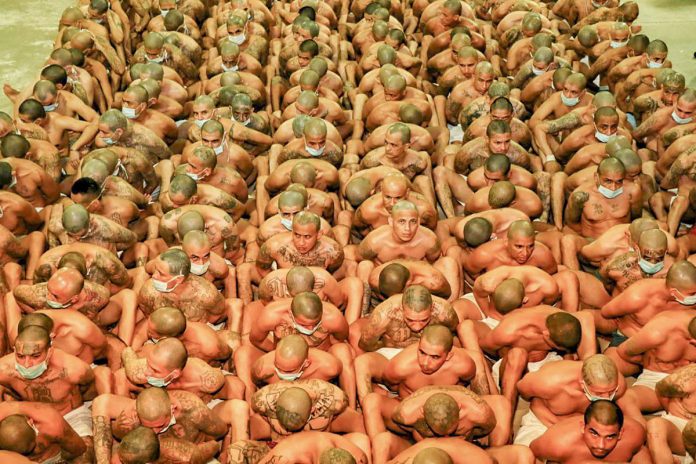 Shocking images have emerged from a prison in El Salvador where inmates were packed like sardines despite the coronavirus pandemic during a 24-hour jailhouse lockdown.
Social-distancing measures were nowhere to be seen at the Izalco prison as the men – some wearing masks – were crammed together as punishment after a jump in the murder rate in the country’s lockups, The Sun reported.
Almost two dozen people were killed in jails on Friday alone, according to the news outlet.
In response, President Nayib Bukele ordered a lockdown of prisons containing gang members, saying their leaders would be sent into solitary confinement, Reuters reported.
“No contact with the outside world. Shops will remain closed and all activities are suspended until further notice,” Bukele tweeted. “Gang leaders will go into solitary confinement.”
Bukele said the “maximum emergency” lockdown would be enforced while police probed 22 killings, the highest total in a single day since he took office last June, a police spokesman said.
El Salvador, one of the most dangerous countries in the world, once had the highest murder rate in the Americas.
There have been 298 confirmed cases of the coronavirus in the country and eight deaths, according to John Hopkins University.
The country of 6.4 million imposed a nationwide lockdown on March 22, and has made breaking the quarantine laws punishable with imprisonment.
“The government is insisting on using confinement as a punishment to whoever violates executive orders, which are unsustainable,” Celia Medrano, an official with the San Salvador-based human rights group Cristosal, told Al Jazeera, the New Zealand Herald reported.
“They have to consider that there is a situation of informal employment for subsistence for many people who are not in conditions to maintain quarantine in their own home.”