A reported COVID-19 party in Las Cuevas ended in tragedy early Sunday when a Barataria woman lost her life and several others were injured when the vehicle they were returning home in crashed.
Dead is mother of three Crystal Julien, 29, of Avenue North, Barataria.
According to police, around 4 am yesterday, the driver of a white panel van was proceeding west along the North Coast Road, Las Cuevas, with two people in the cabin and seven people in the tray. 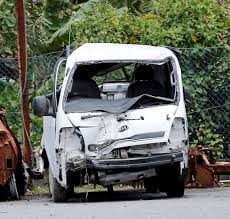 Killed: Crystal Julien
On reaching near Pierre Road however, the vehicle skidded after the driver went through a patch of gravel on the southern side of the roadway. The driver lost control and the van veered off the roadway and overturned, throwing the passengers in the tray out.
Julien died on the scene while the other occupants were taken to the Port-of-Spain General Hospital and the Eric Williams Medical Sciences Complex by Emergency Response Personnel (EHS) personnel where they remain warded yesterday.
The injured were identified as:
Kerven Craig, 32, of LP 59 Fishing Village, Maracas Bay.
Stephanie Mendoza, 26, of Hamilton Trace, Old Bay Road, Maracas Bay.
Ezekiel Morris, 22, of LP 62 Old Bay Road, Maracas Bay.
Marcus Phillip, 36, of Bournes Road, St James.
Christina Hall, 21, of Hamilton Trace, Old Bay Road, Maracas Bay
Mandisa Manley
Christian Roxborough, of Fishing Village, Maracas Bay.
It is unclear where the group was coming from but there were unconfirmed reports that they were returning from a party which took place onboard a yacht off Las Cuevas beach.
However, the police could not verify this up to yesterday.
When Guardian Media visited Las Cuevas yesterday, however, a security guard said members of the T&T Coast Guard had reportedly shut down a party on a yacht and the group was reportedly said to be part of that activity.
As such, those who survived may now be facing possible charges of breaching the Public Health Ordinance which prohibits gatherings of more than five people. Anyone determined to have breached this public health ordinance may be found liable for a fine of $50,000 and imprisonment for up to six months. Further, the driver could also be charged for transporting people in the tray of a vehicle in contravention of the Motor Vehicle Act.
This is the third COVID party to have recently taken place. Police also shut down events in St Ann’s and Wallerfield last month.
This latest incident has again resulted in a call by police for the public to adhere to Government’s Stay-at-Home restrictions.
One resident who assisted in getting those injured to safety described it as “tragic and unfortunate,” adding it could have been avoided had the group stayed at home instead of deciding to lime.
“It really sad to see young people acting so irresponsible, especially in a time like COVID,” the resident, who did not want to be identified, said.
“They had all kind of injuries from buss head to bruises all over, some of them could not even stand up. People were all over the place after the van overturn.”
T&T Police Service Road Safety Coordinator Brent Batson yesterday called on people to have more regard for life, including their own, especially in a time of the pandemic.
“The Trinidad and Tobago Tobago Police Service is disappointed that at a time when the country is trying its best to preserve the lives of persons from a deadly viral pandemic, there are persons seeming to willfully put their lives and that of others at unnecessary risk on the roads leading to very preventable tragedies,” Batson said.
He said people should be appreciating the “gift of human life and family” and focusing on supporting the country through these challenging times.
“The fact that persons continue to engage in reckless behaviour on the roadways shows a lack of regard of what is happening in other countries where the coronavirus has taken the lives of so many loved ones.
“We continue to appeal to all persons to apply care, caution and courtesy on the roads and obey road traffic laws,” Batson added.
Following the accident, several people took to social media expressing both outrage and sympathy.
“Sorry for the innocent children who have lost a parent. I don’t feel sorry for any one of them involved because they big and have sense to know now is not party time. But selfishly went to risk their lives now the innocent relatives have to grieve,” one person wrote.
Other expressed an outpouring of condolences for the deceased children who have now been left motherless.
One family member of Julien who did not want to be identified described her as a kind person who greatly loved her children.
She said instead of posting negative comments, people should remember that the deceased was “somebody’s child,” adding that respect for the dead must be shown at all times.
“Please be kind and act as if this is someone in your family. I am broken,” the relative added.

N.Y Nurse Arrested for Stealing over 1,400 Vials of Fentanyl