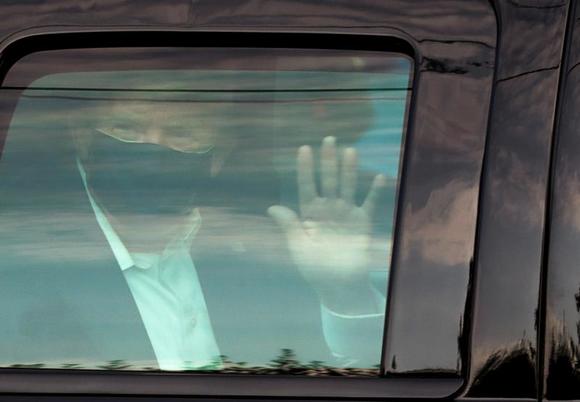 (Reuters) – Doctors treating President Donald Trump for COVID-19 sent conflicting signals about the severity of his condition yesterday, hours before the president surprised supporters gathered outside the hospital with an impromptu motorcade.
Trump, 74, wore a mask as he waved from the back seat of a black SUV that crawled in a caravan of vehicles in front of the Walter Reed National Military Medical Center outside Washington, while supporters waving Trump 2020 flags chanted: “USA! USA!”
Trump, who said on Friday morning he had the infectious disease, was swiftly criticized for risking the health of support staff.
It was Trump’s first appearance in public since he was evacuated to the hospital on Friday.
“It’s a very interesting journey. I learned a lot about COVID,” he said in a video posted on Twitter shortly beforehand.
Democratic presidential challenger Joe Biden tested negative again for the disease that has killed more than 200,000 Americans, his campaign said on Sunday. The former vice president, who shared a debate stage with Trump last Tuesday, previously tested negative in two tests on Friday, the day Trump disclosed his coronavirus infection.
Doctors said the president was improving, although they were monitoring the condition of his lungs after he received supplemental oxygen. They said he could be sent back to the White House as soon as Monday.
But Dr. Sean P. Conley said the president’s condition had been worse than he previously admitted. Conley said Trump’s blood oxygen levels had dropped in prior days and that he had run a high fever on Friday morning.
Asked what tests had revealed about the condition of Trump’s lungs, Conley replied: “There’s some expected findings, but nothing of any major clinical concern.”
Conley’s response suggested the X-rays revealed some signs of pneumonia, said Dr. Amesh Adalja, an infectious disease specialist at Johns Hopkins University.
“The expected finding is that he has evidence of pneumonia in the X-ray. If it was normal they would just say it is normal,” Adalja said.
Other doctors not involved in Trump’s treatment said there was evidence his case was severe. Trump is being given dexmethasone, a steroid used in severe COVID cases, as well as the intravenous antiviral drug Remdesivir and an experimental antibody treatment from Regeneron Pharmaceuticals.
“It would be very unlikely for him to be out and about, and on the campaign trail in less than 14 days,” said Dr. David Battinelli, chief medical officer at New York’s Northwell Health.
Administration officials have given contradictory assessments of Trump’s health. Conley and other doctors delivered a positive prognosis on Saturday, which was promptly undercut by Chief of Staff Mark Meadows.
“I was trying to reflect an upbeat attitude of the team and the president about the course his illness has had,” Conley told reporters on Sunday. “I didn’t want to give any information that might steer the course of illness in another direction.”
‘IRRESPONSIBILITY’
Trump spent much of the year downplaying the risks of the COVID-19 pandemic, which has infected 7.4 million Americans, killed more than 209,000, and caused an economic downturn that has thrown millions out of work.
He said he had been meeting soldiers and first responders at the hospital, raising new questions about whether he was now directly exposing others to the disease.
Critics said personnel who traveled in Trump’s armored SUV during the afternoon motorcade would now have to self-quarantine for 14 days. “The irresponsibility is astounding,” Dr. James Phillips, an attending physician at the hospital, said on Twitter.
The White House Correspondents Association objected that reporters had not been told about Trump’s drive-by before it happened.
White House spokesman Judd Deere said the trip had been approved by medical staff and that appropriate precautions had been taken.
Health officials in New Jersey said they were trying to track down more than 200 people who attended a Trump fundraising event at his golf course there on Thursday. Trump traveled to the event after close adviser Hope Hicks had contracted the virus, and just hours before he announced that he had tested positive.
White House spokeswoman Kayleigh McEnany said on Fox News that Trump tested positive after that fundraiser, not beforehand.
Trump’s illness has upended his re-election campaign as it seeks to fend off Biden in the final month of the race. Several members of his inner circle have also tested positive for the disease, as well as three Republican members of the U.S. Senate.
Two members of the White House residence staff tested positive for COVID-19 a few weeks ago, and Trump’s “body man” aide, Nicholas Luna, has also tested positive, according to a source familiar with the situation.
‘AGGRESSIVE’ CAMPAIGN CONTINUES
Biden in recent days has wished Trump a speedy recovery, while also criticizing his response to the pandemic.
A Reuters/Ipsos poll published on Sunday found Biden had opened a 10-point lead over Trump nationally, slightly wider than it has been for the past two months. Some 65% of Americans said Trump likely would not have been infected had he taken the virus more seriously – a view that half of registered Republicans polled supported. Some 55% said they did not believe Trump had been telling the truth about the virus.
Trump’s campaign vowed that Vice President Mike Pence, who would assume the presidency if Trump were unable to carry out his duties, would have an “aggressive” campaign schedule this week, as would Trump’s three oldest children.
“We can’t stay in our basement or shut down the economy indefinitely. We have to take it head-on,” Trump campaign senior adviser Jason Miller said on ABC’s “This Week” on Sunday.
Pence, who tested negative on Friday, is scheduled to debate Democratic vice presidential nominee Kamala Harris on Wednesday.

Man coughed on woman at laundromat, said he had coronavirus: cops