Trinidad: All 250 people at “zesser party” to be charged 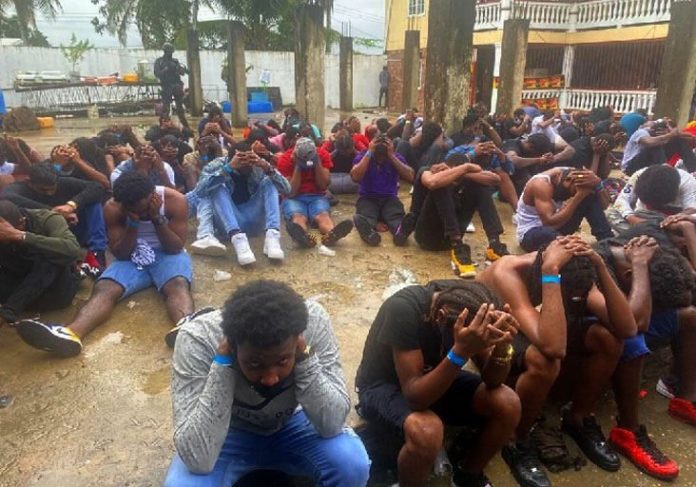 ALL 250 people detained early yesterday morning at a “zesser party” in Caroni will be charged.
This is the assurance of Commissioner of Police Gary Griffith.
He told the Express he had given directives that everyone held at the event be charged under Paragraph 4(d) of the Public Heath coronavirus legislation.
While some are expected to appear before a Chaguanas magistrate today for the offence, others will face charges via summons as names and addresses of everyone who attended the event were obtained by police.
“For far too long in situations like this we would have held and charged only the owners or the promoter or the DJs at these events. Not any more. It should not reach this point. The law is clear. I am not here to explain the law, clarify the law or justify it. I am simply here to enforce it.
“These parties and types of gatherings will be the biggest problem this country faces in relation to the Covid-19 pandemic. We have people in public wearing their masks, we have bars closed for the most part, people on the beaches wearing masks. But the only problem the Police Service is getting are these party events. So now, we will no longer be profiling and releasing. Everyone who breaches the law will face the consequences of their actions,” Griffith said.
Valsayn wedding broke no law
Griffith said with the Christmas season approaching the Police Service will be placing emphasis on targeting and shutting down parties of this nature on both private or public property.
“It is amazing that mere hours after Prime Minister Dr Keith Rowley and Minister of Health Terrence Deyalsingh stressed on the dangers of large social gatherings at public events, over 250 citizens would throw caution to the wind and participate in such an event, which not only endangers those who attend but now these 250-plus persons will be returning to their homes to also endanger their loved ones and the wider public. The (Trinidad and Tobago Police Service) has locked down and provided proper deterrents to ensure that citizens adhere to the regulations via wearing masks in public and note that protocols are being adhered to at beaches and bars by many citizens,” Griffith said.
He said the next objective would be to prevent these types of parties from happening altogether. “Organisers are trying to beat the system, using the ‘get out of jail free’ card by stating it is private property,” Griffith said.
The Commissioner also responded to a question about a wedding held at a residence in South Valsayn on Saturday night.
Scores of guests turned up at the wedding of a relative of a businessman, including top Government officials.
The Express visited the location on Saturday night and observed ushers on the street instructing guests where to park.
Some guests were seen wearing face masks.
Griffith said: “Persons inviting their family and personal friends in small numbers to their home on private property is something totally different, as there is no law being broken, but they do have a responsibility to act in consideration of the Covid-19 guidelines and protocols. This is totally different to zesser parties where organisers are advertising prior to the event and patrons are paying a cover charge to enter the premises of people they do not even know, with a cash bar at the event. This takes away the ‘get out of jail free’ card of it being private property and as such the police would treat it as a violation of the legislation.”
How the zesser raid went down
Around 4 a.m. yesterday, a team of officers from the Special Operations Response Team (SORT) under the supervision of Sgt Mark Hernandez received intelligence that led them to a warehouse at River Branch Trace, off Caroni South Bank Road.
When officers arrived, they said the event was in full swing.
More than 200 people were at the event, most not wearing masks nor practising physical distancing.
As police announced their presence, several partygoers attempted to jump the ten-foot walls of the warehouse to escape along a nearby river.
Several who attempted this sustained injuries when they fell over the warehouse walls.
They were detained.
But others got away from the officers.
Some were eventually identified, detained and questioned as their clothes were muddy from running along the riverbank and they still wore party admission bands on their wrists.
The partygoers were made to line up and were questioned by officers as well as having their photos and personal information taken.
This was done partly because the event was attended by people from all over the country, many of whom have gang links, the Express was told.
When the Express visited the scene early yesterday morning, police were still interviewing people.
Partygoers who were all sitting, still had on their admission wrist bands.
Searches were also done in the immediate area for illegal items as police were told that people at the party had drugs and firearms on them.
Also aiding with the operation were officers from the Inter Agency Task Force, the Multi Operational Police Squad (MOPS) and officers from the Central Division under the command of Assistant Commissioner of Police Balram and Senior Supt Simon. Under current regulations of the Public Health Ordinance, groups are prevented from gathering in excess of ten people. Failure to do so can see people face fines of up to $50,000.
(Trinidad Express)