Jamaican sent to prison for six months for leaving quarantine 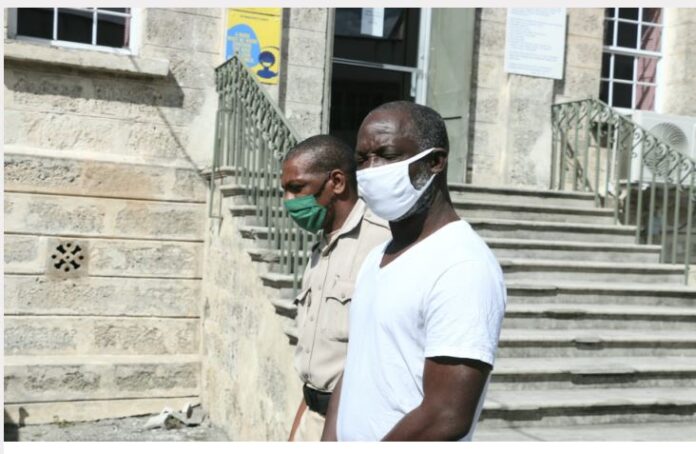 Visitors and Barbadians returning home have been put on notice that they will pay a hefty price for breaching the island’s COVID-19 protocols, especially quarantine directives, if they are found guilty in the law courts.

Chief Magistrate Ian Weekes issued that clear warning today as he sentenced Jamaican visitor Dean George Scott to six months in prison for leaving his quarantine centre to purchase “Fanta and other stuff” at a shop.

“I got to send a message to you and to all the other people that this cannot be tolerated . . . . We have made too much gain, so you have to do six months . . . walking out of quarantine no man, this cannot be allowed,” the senior judicial officer said.

Scott, a 49-year-old mason who was staying at a hotel in Worthing, Christ Church, had moments before pleaded guilty to contravening Paragraph 14 of the Emergency Management (COVID-19) Curfew (No.4) Directive 2020. It was alleged that being a person in quarantine at the St Lucy District Hospital, he did leave the premises without reasonable explanation.

A staff nurse at the Elaine Scantlebury Quarantine Centre, located at the mentioned facility, reported to police that she was informed on December 7, around 7:15 a.m., that a man was in the neighbourhood with a name tag on his hand and was believed to be a patient at the centre.

According to police prosecutor Sergeant Vernon Waithe, a check was made at the centre and Scott was not there.

In his defence, the Jamaican explained that he had arrived in the country on December 6 and was taken to the hospital.

“I went on the road to get some juice and some stuff on the 7th. They never told me I should not have gone on the road. I got a Fanta,” he said.

Asked whether he had not been fed at the quarantine centre, the first-time visitor disclosed that he had asked for something to drink earlier in the morning and was told that he should wait.

“A lady was at the fence feeding some goats, so me walk to her and talk to her and she tell me about a shop down the road,” he said as he again claimed he was not aware that he should not have gone.

Scott went on to say that his test to enter Barbados was negative and so too was the “subtest” done at Paragon.

“This is a crazy situation, you knew why you were there,” the Chief Magistrate stated.

“I understand that we are not accustomed to quarantine and all of that. . . . We have to make adjustments . . . . We are going to be wearing these masks till 2022 at least . . . so get it in our DNA. It is about survival. I need to send a strong message because there is no good reason for you to be doing this. You had a craving and you acted on your craving,” the magistrate lamented before asking Scott whether he was in a position to pay a fine.

He responded that he was not.

“I beg for a chance. Me call me people and dem vex that I came and put myself in trouble. I have money to buy back a ticket because my date past,” he explained with regards to his flight home.

But Weekes made it clear that “this foolishness” would not be “condoned” by the court.

“I cannot send you home just like that and tell you buy a ticket just like that. No, not for this kind of reckless behaviour. If you ain’t got no money you got to do the time . . . . I can’t have other people given large sums of money [to pay] and you just walk around. I have got to send a message to you and to all the other people that this cannot be tolerated.

“You tell me you had a craving and you could have put everybody at risk . . . . People coming in with negative tests, people coming in asymptomatic and with problems,” Chief Magistrate Weekes told Scott, adding that although he knew about the COVID-19 pandemic before he planned his trip to Barbados, he walked out of quarantine.

“You are getting six months . . . so all the others from out of the country will understand that I cannot condone this kind of behaviour. Wunna can’t slip out and do as wunna like . . . . That will be a lesson for all the others . . . . [You] can’t do it.

“We have made too much gain . . . . Walking out of quarantine; no man, this cannot be allowed, and especially for the flimsy reason that you used. That is not a proper reason; a craving? Foolishness! Buy your ticket when you finish the six months.”

Today’s condemnation came less than a week after the Chief Magistrate imposed a $6 000 fine on Barbadian Tyrique Anderson Akeem Thornhill, of No. 71 Edgehill Terrace, St Thomas for breaching the rules of hotel quarantine.

Thornhill said then he had been locked out of his room and jumped from the balcony out of an “element of fear”, although he had his hotel key card in his pocket. He then took a taxi from Blue Horizon Hotel in Christ Church to Lonestar Restaurant in St James and made his way back to another hotel the following day. His fine must be paid in six months or a nine-month jail sentence will be imposed.
(fernellawedderburn@barbadostoday.bb)