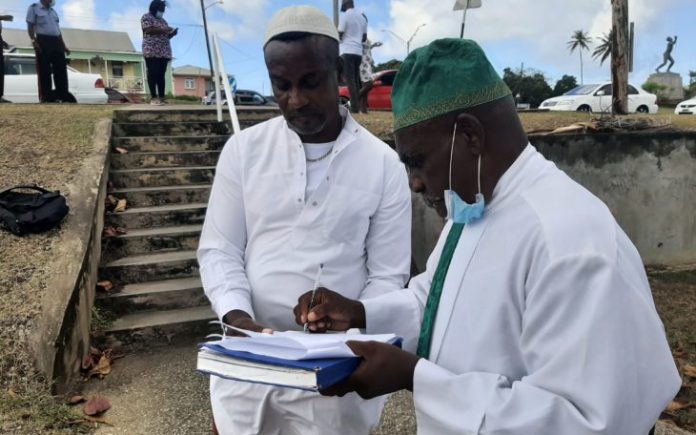 Scores 0f people gathered in the car park at Sky Mall, Haggatt Hall, St Michael this morning to sign a petition advocating for Barbadians who do not want the COVID-19 vaccine to be able to refuse it without having to face consequences.

Organizer Winston Clarke told members of the media that those who do not want the vaccine must not have to fear victimization.

“We are hearing that people at certain work establishments are being told that if they do not take the vaccine that they will be dismissed. Not only that, what is happening is that we have noticed that all Barbadians I believe, have the right to equal opportunity.

“During the lockdown, a lot of the big corporations were allowed to be opened but the small people like the food vendors, the vegetable sellers, the hairstylist, the artisans, were told that they could not come out.

“Now some of these people live on a day-by-day basis and obviously they were not bringing in an income so we never knew how these people were surviving. And I have heard some examples of some people who were in dire distress and this is something that we want to preempt also,” Clarke said.

Clarke said the petition was also to speak out against the section in the Emergency Management (Amendment) Bill 2020 giving the Government the power to acquire private properties if needed during a national emergency.

“We would like that when legislation is being passed, especially legislation that deals with our welfare that we be notified and an opinion is asked of us. This is what governance is about. This is what democracy is about. And I am one of those people that would die for your right to choose the vaccine if you want to. We have self-integrity and we have the right to make autonomous decisions,” he said.

The advocate who stressed that the petition signing event was not a gathering or a protest, indicated that that the initiative was being supported by persons from all walks of life, including Muslims and members of the Rastafarian community who were represented in large numbers.

Clarke said he was pleased with today’s turnout.

“What is happening is that online we have more than 500 signatures so I have surpassed the 1000 mark. But we need to place this before Parliament and that is the important thing. We want to do it under the Standing Orders of Parliament. We are not demanding, we are asking for what is ours. It is our inalienable right to have a right to choice,” he said.

Clarke said he is hoping to submit the petition to Parliament by next week.

Former Member of Parliament Hamilton Lashley and social activist Reverend Buddy Larrier were among those who went to the location to sign the petition under the supervision of the Royal Barbados Police Force. (AH)

Cuba becomes the first country to vaccinate toddlers against COVID-19