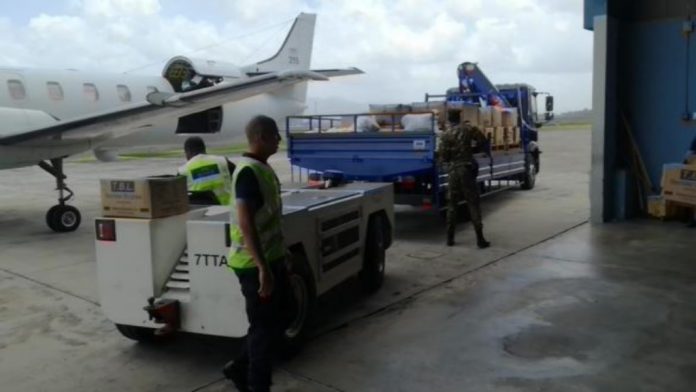 The Ministry of National Security says this country is not only providing assistance to St Vincent and the Grenadines as a result of the volcanic eruption but also to Barbados which has been affected by the volcano’s ashfall.

In a statement yesterday, the ministry said, “The devastating effects of the ash clouds from the eruptions of La Soufriere in St Vincent and the Grenadines over the past week, did not only affect the island and its inhabitants but extended eastward to Barbados.”

It said in a show of support and solidarity with Trinidad and Tobago’s Caribbean neighbours, the Ministry of National Security, through the Office of Disaster Preparedness and Management (ODPM), continued unabatedly to provide relief support to the people of St Vincent and the Grenadines. It added this support has now extended to the people and Government of Barbados as they seek to undertake clean-up efforts following the accumulation of sulfuric ash fall from La Soufriere.

The Ministry of National Security said on Saturday, April 17, much-needed cleaning items that were collected with the assistance of the Ministry of Trade and Industry and members of the Trinidad and Tobago Manufacturers’ Association (TTMA) were stored at the ODPM’s warehouse over the past 24 hours.

It explained that these items were then transferred to the Trinidad and Tobago Air Guard’s (TTAG) Ulric Cross Air Station with the assistance of soldiers from the First Engineer Battalion, Trinidad and Tobago Regiment. The operation continued with both soldiers and airmen working together to load items such as safety goggles, industrial brooms and coveralls onto aircraft provided by the TTAG and the Regional Security System (RSS).

The Air Guard’s aircraft with 2,000 lbs of cargo on board, departed Trinidad at 1.55 pm Saturday for Barbados’ Grantley Adams International Airport. The RSS aircraft departed one hour later with 2,800 lbs of cargo for the same destination. Another 1,000 lbs of cargo are awaiting shipment to Barbados.

The ministry said yesterday these shipments are expected to leave within the next 48 hours.

Meanwhile, the seismic activity at the La Soufriere volcano continued on Saturday according to UWI Seismic Research Centre.

The centre in a Facebook post explained that seismic activity continued with tremor, hybrid earthquakes and over two hours of lower-level tremor generated by explosive activity and venting.

The centre said the volcano continues to erupt although explosive activity appeared, up to Saturday, to be waning but it added there maybe the growth of a lava dome, which is yet to be confirmed.

The volcano erupted on April 9.