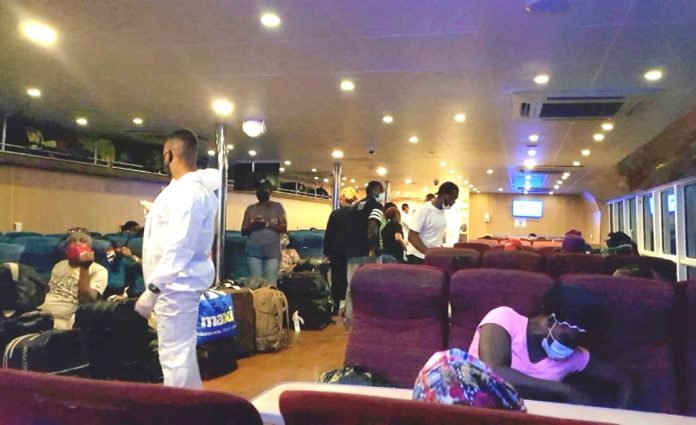 A woman, who claims she was prepared to care for seven minors on the journey from St Vincent and the Grenadines to Trinidad and Tobago in a repatriation exercise on April 14, says she is still confused about why three of the minors were left behind.

In an interview with Guardian Media, Lichelle Cummings said she was making the trip between the islands with her three children.

Trinidadian-born Cummings said she had decided to bring her children back to T&T after the La Soufriere volcano began explosively erupting on April 9.

Cummings said when she arrived at the port in St Vincent’s capital Kingstown with her children on April 14, she met many other families waiting to board the Galleons Passage.

The vessel repatriated 75 citizens after taking aid to the island on April 13.

But that number was initially 78 – with three minors included. However, after the three were boarded, they were removed by Immigration officers from Trinidad.

Former National Security Minister Stuart Young said last week that the minors were not allowed to make the trip because there was no information from their parents or guardians on who would receive them in Trinidad.

Young said the Government therefore could not allow them to come to Trinidad.

But Cummings is disputing that.

“While I was there, I was contacted by a mother, she said her friend told her I was on the boat and she asked me if I could carry her kids. She sent a photo of her id, she sent a letter stating I would be responsible for the children and she had given her permission,” Cummings said.

Those two children, along with two others, were allowed to travel to Trinidad with Cummings.

She claimed she was asked by an Immigration officer on the vessel to take responsibility for the three minors.

But Guardian Media spoke to a senior Immigration official who disputed this, saying officers would never ask someone to perform in this capacity.

Cummings said she was in contact with relatives of the three minors both in St Vincent and in T&T. She said she was willing and ready to take responsibility for all seven minors.

Cummings said she also wanted to correct comments being posted on a Guardian Media story about one of the minors. She said she did not change her mind about taking responsibility for the child.

She said when the vessel got to T&T, the father of two of the children who travelled with her met them to quarantine at the UWI St Augustine campus.

She said the other two children were left in her care during the quarantine period and she ensured their parents picked them up before she left the facility on Thursday to start seven days of quarantine at home.

She said she was disappointed the other three were not allowed to travel to T&T and questioned their wellbeing, saying the volcano’s explosive eruption had made life in St Vincent very difficult.