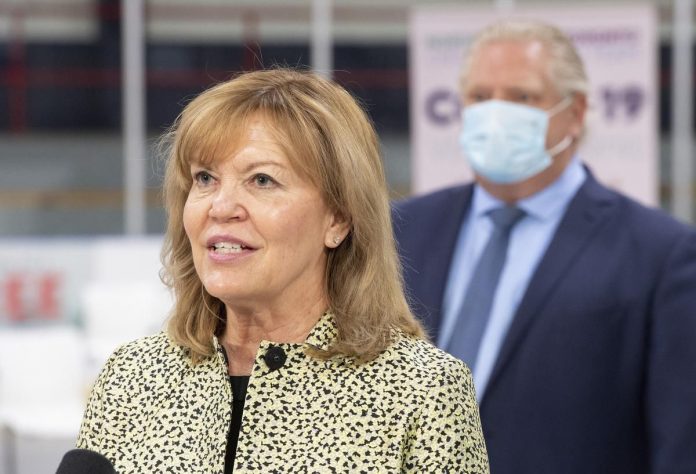 Ontario is putting half of all COVID-19 vaccine shipments into designated hot zones, and anyone 18 and up will be eligible to begin booking shots by the end of May thanks to major increases in supply from Pfizer, provincial officials say.

The extra doses go to the highest-risk neighbourhoods next week, providing an extra 1 million jabs above what has already been allocated, senior Ministry of Health staff told a background briefing Thursday updating the provincial vaccination plan.

“They will see a big increase,” one official said in advance of a news conference by Health Minister Christine Elliott and Solicitor General Sylvia Jones.

People aged 45 and up are now eligible in hot spot mass vaccination clinics and this drops to age 18 next week, although pop-up clinics have already been open to those over 18.

Elliott signalled earlier this week that the government was seriously considering a recommendation from the science table of experts advising Premier Doug Ford — who remains in isolation after a COVID-19 exposure from a staffer — that 50 per cent of vaccines should go to hot spots to better blunt the third wave, preventing more illnesses and saving more lives with hospitals under extreme strain.

And starting Monday, people with high-risk medical conditions such as severe obesity, immunosuppression from chemotherapy or other medications and intellectual or developmental disabilities such as Down syndrome are eligible to book.

Also Monday, people in the higher-risk group of occupations who can’t work from home can book, such as school and food industry workers, followed May 10 by the grocery workers, taxi drivers and others in a second, lower-risk category.

Age eligibility for the AstraZeneca vaccines in 1,400 pharmacies remains at 40 until more supplies arrive, with the date and amount of future shipments unknown.

A senior medical official said the province expects word in June on whether people who have received a first dose of AstraZeneca could receive a second dose of Pfizer or Moderna vaccines.

The next shipment of 388,000 Moderna vaccines is due May 10 in addition to 236,100 does this week, numbers that are dwarfed by the approximately 790,000 weekly doses from Pfizer throughout May rising to 940,000 in the last week of May and weekly throughout June.

For hot spots, eight pharmacies in Toronto and another eight in Peel will begin a pilot project Friday offering Pfizer vaccines to residents age 55 and up but supplies will be limited to 150 doses weekly, and will use their own booking systems.

Officials said the program will expand to more pharmacies later in May.