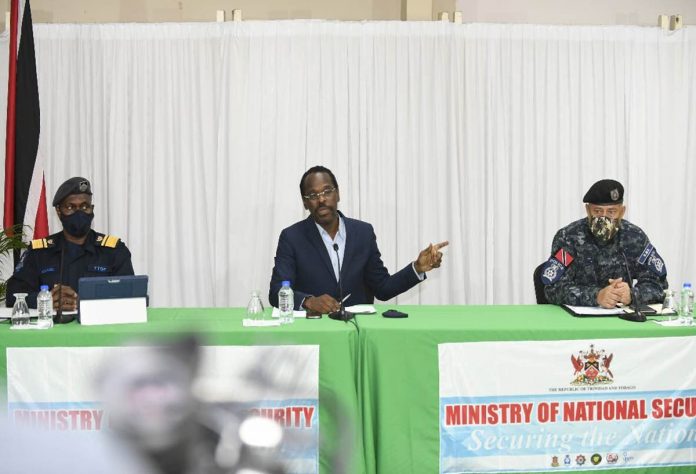 Minister of National Security Fitzgerald Hinds said yesterday that the continued border breaches by illegal immigrants involve some in the business sector and rogue elements in the Trinidad and Tobago Police Service, among other arms of national security.

Speaking at a news conference in Port-of-Spain yesterday, Hinds said many citizens were very involved and complicit in the illegal immigration trade.

He revealed he even had details given to him by an informant.

“Yesterday I got a call from an informant who got my phone and told me, Minister Hinds, they see the coast guard vessel when they on patrol so they know where it is heading. And there are people in that village in east-Trinidad who will call their criminal counterparts and say well, ‘Yuh come here now…yuh could move. This is part of the reality of it so the struggle is a serious one,” said Hinds.

But it was no one-man operation Hinds said, as there are those in law enforcement who play a part.

He referred to the recent bust of a cache of weapons, which was seized by the police, at the Piarco Airport on April 22, saying T&T had a real problem as it was battling breaches of both illegitimate and legitimate entry points.

“We are not unaware that there are complicit or rogue elements in our ranks, in our services. Everyone is aware of that and I expect the leadership of these organisations to take action boldly, forcefully, and swiftly to deal with those Achilles heels, those soft underbellies, those kinks in the amour, that render all our investments, all our work valueless because of their complicity,” said Hinds.

He called on law enforcement personnel of lower ranks to step up their game and operate at full throttle.

“My call today as Minister of National Security is that to all of you, men and women of the Police Service, the Defense Force, the Prison Service, Fire Service, Customs, Immigration, the intelligence platform…all of you who are sworn and who are paid to conduct exercises in the protection of the people of Trinidad and Tobago who are suffering great trauma and pain and tears…you need to step up your game. You need to do like your leaders who I could vouch for, operating at full throttle.