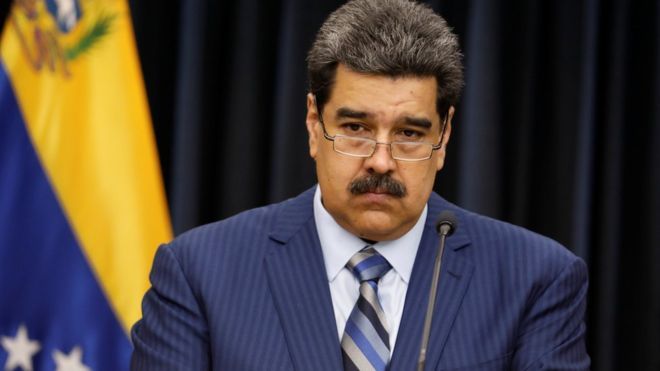 Venezuela’s government said it foiled a marine incursion on Sunday by “terrorist mercenaries” who attempted to enter the country on speedboats from neighboring Colombia, which opposition leaders dismissed as a staged incident.
President Nicolas Maduro frequently accuses political adversaries of attempting to overthrow him with the backing of Washington, which has vowed to force him from office through sanctions that have crippled the OPEC nation’s oil exports.
Critics of the ruling Socialist Party often dismiss such accusations as stunts used as an excuse to detain opponents of the government.
The group landed early on Sunday on the coast of La Guaira, about 20 miles (32 km) from the capital Caracas, Interior Minister Nestor Reverol said in a televised address.
“They tried to carry out an invasion by sea, a group of terrorist mercenaries from Colombia, in order to commit terrorist acts in the country, murdering leaders of the revolutionary government,” he said.
Opposition leader Juan Guaido said the government was seeking to distract from recent violent events including a deadly prison riot on Friday and bloody Caracas gang battle on Saturday night.
“The regime is seeking to divert attention with a supposed incident (in La Guaira) plagued with inconsistencies, doubts and contradictions,” the press team for Guaido said in a statement.
Guaido, who is the head of the opposition-run congress, is recognized by the United States and more than 50 other countries as Venezuela’s legitimate leader.
The State Department on Sunday cast doubt on the official version of events and said it continues to support Guaido.
“The Maduro regime has been consistent in its use of misinformation in order to shift focus from its mismanagement of Venezuela,” said a State Department spokesman.
“We fully support Interim President Juan Guaido, the National Assembly, and the people of Venezuela in their quest for a peaceful democratic transition.”
Colombia’s foreign ministry said the assertions of Colombian involvement were “unfounded” and were meant to distract from “the true problems that the Venezuelan people are living.”
Socialist Party leader Diosdado Cabello said eight people were killed and two detained.
Defense Minister Vladimir Padrino said one of the speedboats had sunk, and that military vessels were searching the coast for survivors.
Maduro has overseen a six-year economic crisis that has left many citizens unable to obtain basic food and medicine and forced nearly five million people to emigrate.
But he retains the backing of the country’s armed forces as well as countries including China and Russia, which have harshly criticized the U.S. sanctions.