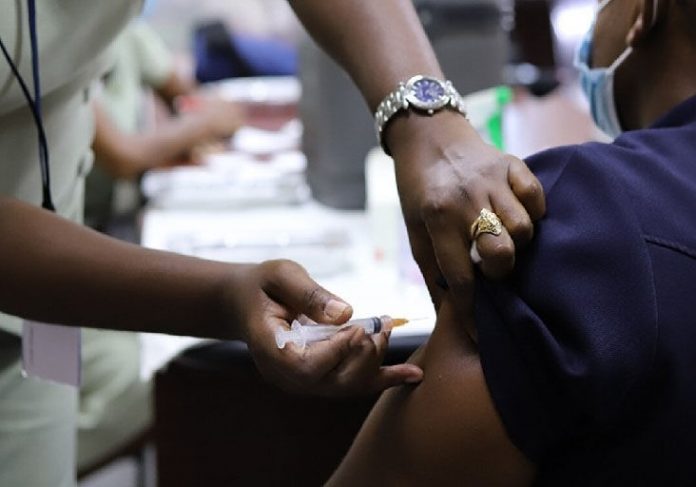 (Trinidad Guardian) In a landmark move in the country’s fight against the COVID-19 pandemic, 100 frontline healthcare workers were the first to be inoculated as the Ministry of Health began its first phase of vaccinations at the Couva Multi-Training Facility yesterday.

They received their first of two doses of the Oxford-AstraZeneca vaccine.

The first person to receive a dose was Keisha Prevatt-Gomez, a nurse who treats COVID-19 patients at the Infectious Disease Control department at the Caura Hospital.

She admitted she had her reservations about getting the jab at first but after doing her research, she was convinced.

“I did do the research. I looked at the science behind the vaccine and I am confident that it’s going to work and that I am making the right decision for myself and the wider population,” she said shortly after receiving it.

She was followed by Dr Don Martin, Medical Chief of Staff at the Couva Medical and Multi-Training Facility who said he was proud to be one of the “pioneers who stepped forward to take this vaccine.”

“I think it’s the most pivotal step in our fight against the scourge of COVID-19. If we want to get to that point of normalcy where we can interact with each other, we must be able to vaccinate as much persons as possible,” he said.

During the opening ceremony, Minister of Health Terrence Deyalsingh proclaimed how proud he was of the healthcare workers for coming forward to be inoculated.

“I am so proud of our healthcare workers. A hundred of them who have decided that today is the day they are going to lead this country to take control of the virus,” he said.

Health Minister Terrence Deyalsingh poses for a picture with the first set of recipients of the COVID-19 vaccine during the NCRHA’s public vaccination programme of over100 health workers at the Couva Hospital, Uriah Butler Highway, yesterday.

The minister said yesterday’s gesture set an example for other healthcare workers and citizens, among whom the ministry has noted an aversion to receiving the jab.

“By this 100-persons showing today, you are telling the country that you believe in the science…that you don’t believe in myths and superstition and old wives tales.”

The ministry has since undergone campaigns to educate and promote the vaccine, often dedicating large portions of their tri-weekly press briefings to the endeavour.

The launch of the first phase of vaccinations came less than 24 hours after the World Health Organization (WHO) gave emergency use authorisation to two versions of the Oxford-AstraZeneca vaccine on Monday; one produced by SKBio in the Republic of Korea and the other which is produced by the Serum Institute of India.

This approval is exactly what the Ministry of Health has been waiting on before administering the vaccine. Throughout the pandemic officials such as the Minister of Health and Chief Medical Officer maintained that they would only employ a vaccine which has received the WHO’s approval—a point Minister Deyalsingh reiterated yesterday.

The frontline workers are being inoculated from a batch of 2,000 doses of the Oxford-AstraZeneca vaccine the country got as a gift from Barbados last week. Barbados received the vaccines from India.

The WHO’S approval now triggers the distribution of vaccine doses through the COVAX facility of which T&T has already bought into through a US$1.5 million downpayment.

The country is expected to receive between 100,000 to 120,000 doses of the Oxford-AstraZeneca vaccine within the next two weeks from the facility.

These doses would be a part of the country’s first phase of vaccinations which would go to healthcare workers, the elderly and essential workers.

Although the Ministry of Health is exploring other avenues of procuring vaccines, Minister Deyalsingh said it is unlikely they would be successful before the batch is received from COVAX.