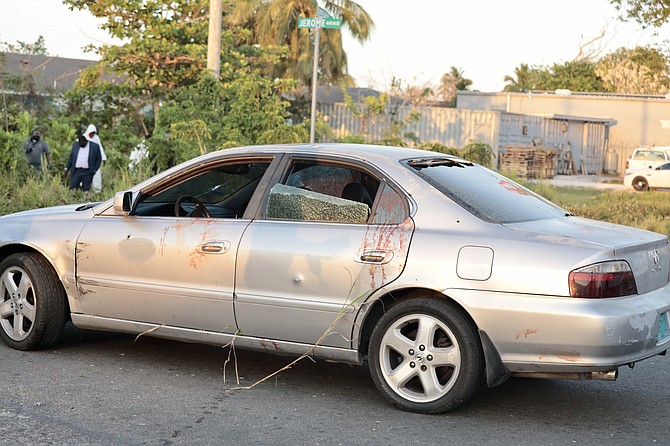 (The Nassau Guardian) Six men who were released from police custody yesterday were shot and killed two hours later at the intersection of Jerome Avenue and Chesapeake Road by assailants who escaped the scene, authorities reported last night.

Police said a 19-year-old woman and a two-year-old girl were also shot while in a car behind the vehicle those men were in.

Assistant Commissioner of Police Solomon Cash said the child, who was “supposedly one of the deceased persons’ baby”, was shot in the head.

He added that the woman is believed to be an associate of one of the victims.

“Once the officers arrived on the scene, they met six individuals — one and two [were] on the outside of a silver Honda Inspire and three, four, five and six [were] confined to the inside of the Honda Inspire.

“The officers did the preliminary assessment of the scene and discovered that all six victims were shot multiple times and appeared lifeless. Officers also discovered two additional victims — one an adult female victim who survived multiple gunshot wounds and a minor, a two-year-old victim, who also suffered a gunshot wound.”

He said the injured were transported to the Accident and Emergency Department at Princess Margaret Hospital, where they were listed as critical but stable.

Cash said the six victims, who were released from police custody with charges pending in relation to firearm possession, were traveling on Jerome Avenue when four men, dressed in black, exited a white Kia Sportage and opened fire on them.

Once the shooting started, the Honda ran off the road into bushes, according to police.

“Afterwards, the suspects continued firing their weapons on the inside of that vehicle,” Cash said.

The Kia Sportage was later recovered on nearby Edward Avenue.

Cash said the license plates that were on that vehicle were not the registered plates.

News of the shooting spread quickly, with graphic videos from the scene being widely circulated via social media.

An anxious and angry crowd gathered within minutes. Some shouted at the police to give them answers on what had happened. Others prayed aloud as the bodies of the murdered men were carried away and placed into individual hearses.

At the press conference, Rolle said the suspects were “plotting out” for the victims after they were released from custody.

He said police were looking through closed-circuit television footage from the area of the incident, which he noted is one of the deadliest shootings in the country in recent history.

The commissioner announced the establishment of an incident room at the Central Detective Unit for members of the public who may have information in relation to the incident.

“We will establish a presence there and police officers will be able to sift through information as we attempt to find these individuals,” Rolle said.

“Also effective immediately, we will be establishing a team that will be going into these various communities tonight in search of persons. We understand that these individuals may have been involved in these rival groups.

“We want to make sure that there is no retaliation. We’re not going to allow that tonight or tomorrow or the following days onward. We’re going to establish a formidable presence to ensure that every household, every member in this city of New Providence remains safe until we find these individuals and bring them to justice.”

Rolle added, “As I alluded earlier, we have a number of persons out right now. We are following some leads.”

Dames, who noted the country had experienced an “unprecedented incident”, expressed the government’s concern.

“This tragic incident is certainly unprecedented. It speaks to the fact that you had this one incident, but you had multiple lives lost,” said Dames, who offered condolences to the families of the deceased.

“Oftentimes we speak about the effects of assault rifles and the prevalence of firearms, but more particularly assault rifles in our nation and the fact that when they end up in the hands of untrained and ruthless individuals, something like this can happen and it did.

He added, “To all of those who may know the persons responsible for these six deaths, we ask you to come forward. Someone knows who is responsible for it … We will not sit back and allow our nation to be overrun by a group of misfits.

“We are still a nation of laws and we will see to it that those who are responsible are brought to justice in the quickest possible time and all of those out there who may be covering for them too will face the consequences of their actions. We cannot afford to have incidents like this in a nation as small as ours. It can’t happen and it won’t happen.”

Minister of Tourism and Aviation Dionisio D’Aguilar, the MP for Freetown, noted the mass shooting was “incredibly unfortunate”.

“It is so senseless,” he said.

“It’s so devastating. It’s so unnecessary for this type of event to happen. I just cannot believe that this is a solution to some sort of problem that you are having with another person. I said this in Parliament: talk it out, speak it out, vent it out. But, in the name of the great Lord above, don’t kill each other.

“This is just so horrible.”

Just before midnight last night, the police commissioner confirmed that police still had no one in custody in relation to the murders.

The country’s murder count so far this year is 39.