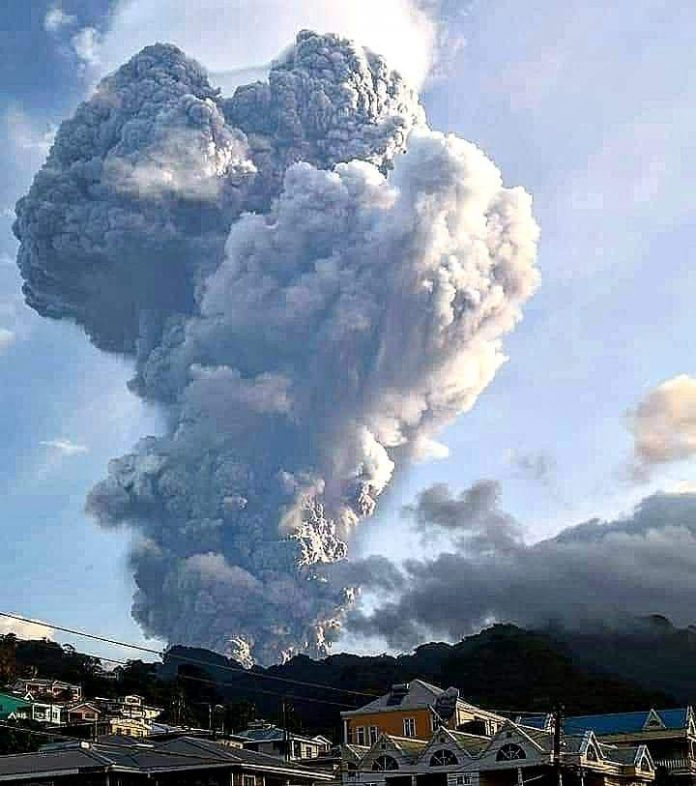 The volcano spewed a tremendous amount of ash and hot gas in the biggest explosive eruption yet since volcanic activity began on the eastern Caribbean island late last week.

The ash cloud produced by Monday’s eruption was blown in the direction of Barbados and seemingly turned day into night as ash rained down on the island. The Grantley Adams International Airport in Barbados will be closed until noon on Wednesday as a result of the ashfall, reported Stabroekn News.

Experts called Monday’s eruption a “huge explosion” that generated pyroclastic flows down the volcano’s south and southwest flanks, destroying everything in its path.

“Anything that was there, man, animal, anything … They are gone. And it’s a terrible thing to say it,” Richard Robertson, a geologist with the University of the West Indies Seismic Research Center, told NBC Radio.

Robertson says the volcano’s old and new dome have been destroyed, and that a new crater has been created.

Scientists studying the La Soufrière volcano’s eruptions on the Caribbean island of St. Vincent say explosions could continue for days or even weeks, and that the worst may be yet to come.

The explosion on April 9 sent an ash plume shooting an estimated 52,000 feet into the atmosphere and forced the evacuation of about 16,000 people. Thousands have gone to government-run shelters that screen for COVID-19 and isolate anyone testing positive.

Cruise ships are also on standby near the island to evacuate residents, but people have to be vaccinated before they board a cruise ship, St. Vincent and the Grenadines Prime Minister Ralph Gonsalves told reporters Saturday.

There have been no reports of anyone being killed or injured. Before the eruption began, the government ordered people to evacuate the most high-risk area around the 4,003-foot volcano after scientists warned that magma was moving close to the surface.

The volcano had been dormant since 1979, but it started rumbling and releasing smoke and steam toward the end of 2020 and is now being compared to the worst eruption in St Vincent’s history in 1902 when as many as 1,600 people were killed.

Early Sunday, the National Emergency Management Organization of St. Vincent and the Grenadines tweeted that a “massive power outage” was underway following another “explosive event” of the volcano, but authorities had restored electricity to most of the island by late afternoon.

The UWI Seismic Research Center says these are not lava flows but pyroclastic flows which are “moving mixtures of ash, rock fragments” and gas. This dangerous mixture can travel down volcanoes at speeds of up to 120 mph and can cause total devastation.

“These flows are really moving masses of destruction,” Robertson said. “They just destroy everything in its path. Even if you have the strongest house in the world, they will just bulldoze it off the ground.”

The St. Vincent and the Grenadines National Emergency Management Organisation called the scene a “battle zone.”

Gonsalves said water supplies to most of the island had been cut off and its airspace is closed because of the smoke and thick plumes of volcanic ash moving through the atmosphere.

“Agriculture will be badly affected, and we may have some loss of animals, and we will have to do repairs to houses. But if we have life and we have strength — we will build it back better, stronger, together,” he said.

Smoke spews from the glowing dome of the La Soufrière volcano in Saint Vincent and the Grenadines on April 8 (R) and the resulting eruption (L) on April 9. Photos courtesy UWI Seismic Research Center
The Barbados Defense Force has been deployed to St. Vincent to provide humanitarian assistance as part of a disaster response mission, the Caribbean Disaster Emergency Management Agency said.

Residents in Barbados, about 124 miles to the east, have also been urged to stay indoors.

“This is to protect yourselves and your family,” said Chief Medical Officer Kenneth George.

15 killed in Haiti’s capital amid spike in violence